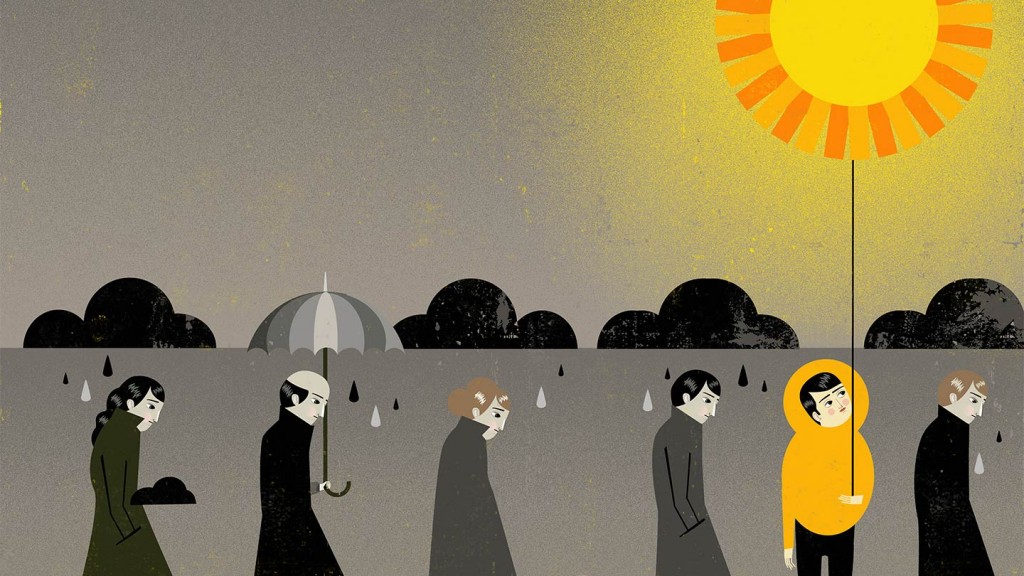 I’m considering building an ark, because it feels as if it’s been raining for 40 days and 40 nights.

In one of the wettest, coldest Mays in Maryland’s history, highly sensitive types like myself are having difficulty not getting pulled into a depressive mood that often accompanies bad weather.

I am clearly affected by rain — especially when it rains consistently for weeks as it has this spring. And I know other people who are, too, so I thought I’d study why the extra precipitation alters the limbic system (emotional center) of the brain and review the research regarding mood and weather.

Studies That Link Mood and Weather

John Grohol, PsyD, founder and CEO of Psych Central, offers a great overview of the studies that exist on weather and mood. There is research that says weather has little to do with mood, he notes, but “the overall preponderance of evidence suggests that weather can have more than just ‘a little effect’ on you mood.”

Here are some of the studies Grohol presents.

The largest, published in 1974 in the journal Acta Paedopsychiatrica, involved 16,000 students in Basel City, Switzerland. In the study, 18 percent of the boys, and 29 percent of the girls, responded negatively to certain weather conditions, exhibiting symptoms of fatigue, dysphoric moods, irritability, and headaches.

In a small study published in 1984 in the British Journal of Psychology, a group of 24 men were studied over 11 days. It was determined that humidity, temperature, and hours of sunshine had the greatest effect on their mood. The finding on humidity was the most interesting to me. “High levels of humidity lowered scores on concentration while increasing reports of sleepiness,” the researchers wrote.

Finally, in a study published in Psychological Science in 2005, researchers followed 605 participants in three separate studies to determine the connection between mood and weather. They found that pleasant weather (a higher temperature or barometric pressure) was related to higher mood, better memory, and “broadened” cognitive style during the spring as subjects spent more time outside. The abstract states, “These results are consistent with findings on seasonal affective disorder, and suggest that pleasant weather improves mood and broadens cognition in the spring because people have been deprived of such weather during the winter.”

According to an analysis published in Emotion in 2008, much of the research indicates that warmer weather seems to bring cheerier moods.

In a study published in Science in 2013, researchers reported that as temperatures rose, the frequency of interpersonal violence increased by 4 percent, and intergroup conflicts by 14 percent. The same fluctuation in behavior occurred with extreme rainfall.

I’ve always found it curious why suicides spike in spring and summer. Isn’t that when depression is supposed to lift? Grohol mentions a comprehensive study review published in 2012 in Acta Psychiatrica Scandinavica that examined the literature on suicide seasonality between 1979 and 2009. As a group, the studies confirmed a seasonal pattern for both the Northern and Southern hemispheres: an increase in suicides during spring and early summer, and a decrease in autumn and winter months. In addition, the studies suggested that there is an especially strong pattern of suicide in the spring for men and older individuals, and for violent methods of suicide.

The ‘Happy Complex’ of Spring

In my blog post about spring depression and anxiety, I offered a few theories as to why moods dip in April and May: change and transition (which is harder on some of us), hormone fluctuation as we adjust to more sunlight, allergies and toxins in the air, and perhaps the “happy complex”: Everyone else is humming as they work in their garden, delighted that spring has arrived — and you feel that pressure to be happy as well, which makes you even more, well, unhappy.

Some people feel left out of the social interaction that happens more in spring, too. Experts believe that more suicides happen in spring because the warmer weather provides a person with the extra energy to pursue a suicidal plan that they didn’t have the energy to pursue during the winter months.

Weather and the Highly Sensitive Person

Weather is going to affect you more if you are a highly-sensitive person, as defined by Elaine Aron, PhD, in her best-seller, The Highly Sensitive Person. If you answer yes to these and most of the questions on Aron’s website, you’re probably in the club, which holds 15 to 20 percent of human beings. Are you easily overwhelmed by bright lights and noise? Do you startle easily? Do other people’s moods influence you? Does caffeine have a great effect on you?

Research has indicated that hypersensitive people are genetically different from folks who have a normal degree of sensitivity. This might explain why the rain or cold or heat affects some of us much more than others, and why some people would thrive in a humid, hot climate, while others would wilt. Your response to weather would depend on your sensitivity type.

In a study published in Emotion in 2011, researchers defined weather-reactivity types by linking self-reported daily moods across 30 days with objective weather data. They found that there were four distinct types of people when it comes to reactions to weather. As they wrote in the abstract:

The types were labeled Summer Lovers (better mood with warmer and sunnier weather), Unaffected (weak associations between weather and mood), Summer Haters (worse mood with warmer and sunnier weather), and Rain Haters (particularly bad mood on rainy days). In addition, intergenerational concordance effects were found for two of these types, suggesting that weather reactivity may run in the family.

I know my weather type. I’m a Summer Lover and a Rain Hater. Without question, I am also a highly sensitive person, which makes my mood very vulnerable to the changes in the weather.

All Rain Haters and highly sensitive types are welcome on my ark.

3 thoughts on “Does Weather Affect Your Mood?”