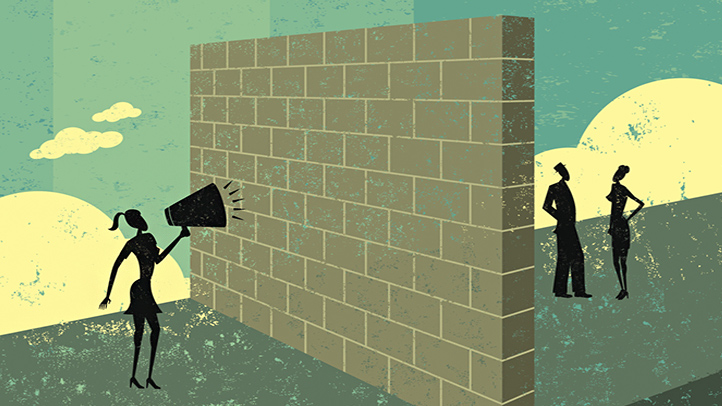 We’ve come a little way in reducing the stigma that’s associated with mental illness, but not nearly far enough. Consider these results pulled from a public attitude survey in Tarrant County, Texas, conducted by the county’s Mental Health Connection and the University of North Texas in Denton to determine the community’s view of mental illness:

Unfortunately, these beliefs are often held by those closest to us — by the very people from whom we so desperately want support.

Resenting them for their lack of understanding isn’t going to make things better, though. It almost always makes things worse. Whenever I hit a severe depressive episode, I am reminded once more that I can’t make people understand depression any more than I can make a person who hasn’t gone through labor understand the intense experience that is unique to that situation. Some people are able to respond with compassion to something that they don’t understand. But that is very rare.

Whenever I try to open the doors of communication and express to a family member or friend how I am feeling — when I try to articulate to them the pain of depression — and am shut down, I usually come away extremely hurt. I immediately assume that they don’t want to hear it because they don’t love me. They don’t care enough about me to want to know how I am doing.

But distinguishing between the two is critical in maintaining a loving relationship with them. My husband explained this to me very clearly the other day. Just because someone doesn’t understand depression or the complexity of mood disorders doesn’t mean they don’t love me. Not at all. They just have no capability of wrapping their brain around an experience they haven’t had, or to a reality that is invisible, confusing, and intricate.

“I wouldn’t understand depression if I didn’t live with you,” he explained. “I would change the subject, too, when it comes up, because it’s very uncomfortable to a person who isn’t immersed in the daily challenges of the illness.”

This is a common mistake that many of us who are in emotional pain make. We assume that if a person loves us, he or she would want to be there for us, would want to hear about our struggle, and would want to make it better. We want more than anything for the person to say, “I’m so sorry. I hope you feel better soon.”

The fact that they aren’t able to do that, however, does not mean they don’t love us. It just means there is a cognitive block, if you will, on their part — a disconnect — that prevents them from comprehending things beyond the scope of their experience, and from things they can see, touch, taste, smell, and feel.

It is incredibly difficult not to take a person’s lack of response or less-than-compassionate remark personally, but when we fall into this trap, we give away our power and become prey to other people’s opinions of us. “Don’t Take Anything Personally” is the second agreement of Don Miguel Ruiz’s classic The Four Agreements; the idea saves me from lots of suffering if I am strong enough to absorb the wisdom. He writes:

Whatever happens around you, don’t take it personally … Nothing other people do is because of you. It is because of themselves. All people live in their own dream, in their own mind; they are in a completely different world from the one we live in. When we take something personally, we make the assumption that they know what is in our world, and we try to impose our world on their world.

Even when a situation seems so personal, even if others insult you directly, it has nothing to do with you. What they say, what they do, and the opinions they give are according to the agreements they have in their own minds … Taking things personally makes you easy prey for these predators, the black magicians. They can hook you easily with one little opinion and feed you whatever poison they want, and because you take it personally, you eat it up ….

I have learned that when I fall into a dangerous place — when I am so low that mindfulness and other techniques that can be helpful for mild to moderate depression simply don’t work — I have to avoid, to the best of my ability, people who trigger feelings of self-loathing. For example, some people in my life adhere tightly to the law of attraction and the philosophies of the book The Secret by Rhonda Byrne that preach that we create our reality with our thoughts. They have been able to successfully navigate their emotions with lots of mind control and therefore have trouble grasping when mind control isn’t enough to pull someone out of a deep depression.

I struggle with this whenever I fall into a depressive episode, as I feel inherently weak and pathetic for not being able to pull myself out of my pain — even if it means simply not crying in front of my daughter — with the type of mind control they practice, or even mindfulness or attention to my thoughts. This, then, feeds the ruminations and the self-hatred, and I’m caught in a loop of self-flagellation.

Even if they aren’t thinking I’m a weak person, their philosophies trigger this self-denigration and angst in me, so it’s better to wait until I reach a place where I can embrace myself with self-compassion before I spend an afternoon or evening with them. If I do need to be with people who trigger toxic thoughts, I sometimes practice visualizations, like picturing them as children (they simply can’t understand the complexity of mood disorders), or visualizing myself as a stable water wall, untouched by their words that can rush over me.

Focus On the People Who Do Understand

In order to survive depression, we must concentrate on the people who DO get it and surround ourselves with that support, especially when we are fragile. I consider myself extremely lucky. I have six people who understand what I’m going through and are ready to dole out compassion whenever I dial up their numbers. I live with an extraordinary man who reminds me on a daily basis that I am a strong, persevering person and that I will get through this. Whenever my symptoms overtake me and I feel lost inside a haunted house of a brain, he reminds me that I have a five hundred pound gorilla on my back, and that my struggle doesn’t mean that I am a weak person not capable of mind control. At critical periods when I’m easily crushed by people’s perceptions of me, I must rely on the people in my life that truly get it. I must surround myself with folks who can pump me up and fill me with courage and self-compassion.

Depression support groups — both online and in person — are invaluable in this regard for offering peer support: perspectives from people in the trenches who can offer key insights on how to deal with the invisible beast. I created two online groups, Group Beyond Blue on Facebook and Project Beyond Blue, but there are many forums worth checking out, like the ones at Psych Central. Actual support groups hosted by such organizations as National Alliance on Mental Illness (NAMI) and Depression and Bipolar Support Alliance (DBSA), and support offered by a therapist, are also great resources to help give you the coping tools you need to get by in a world that doesn’t get it.