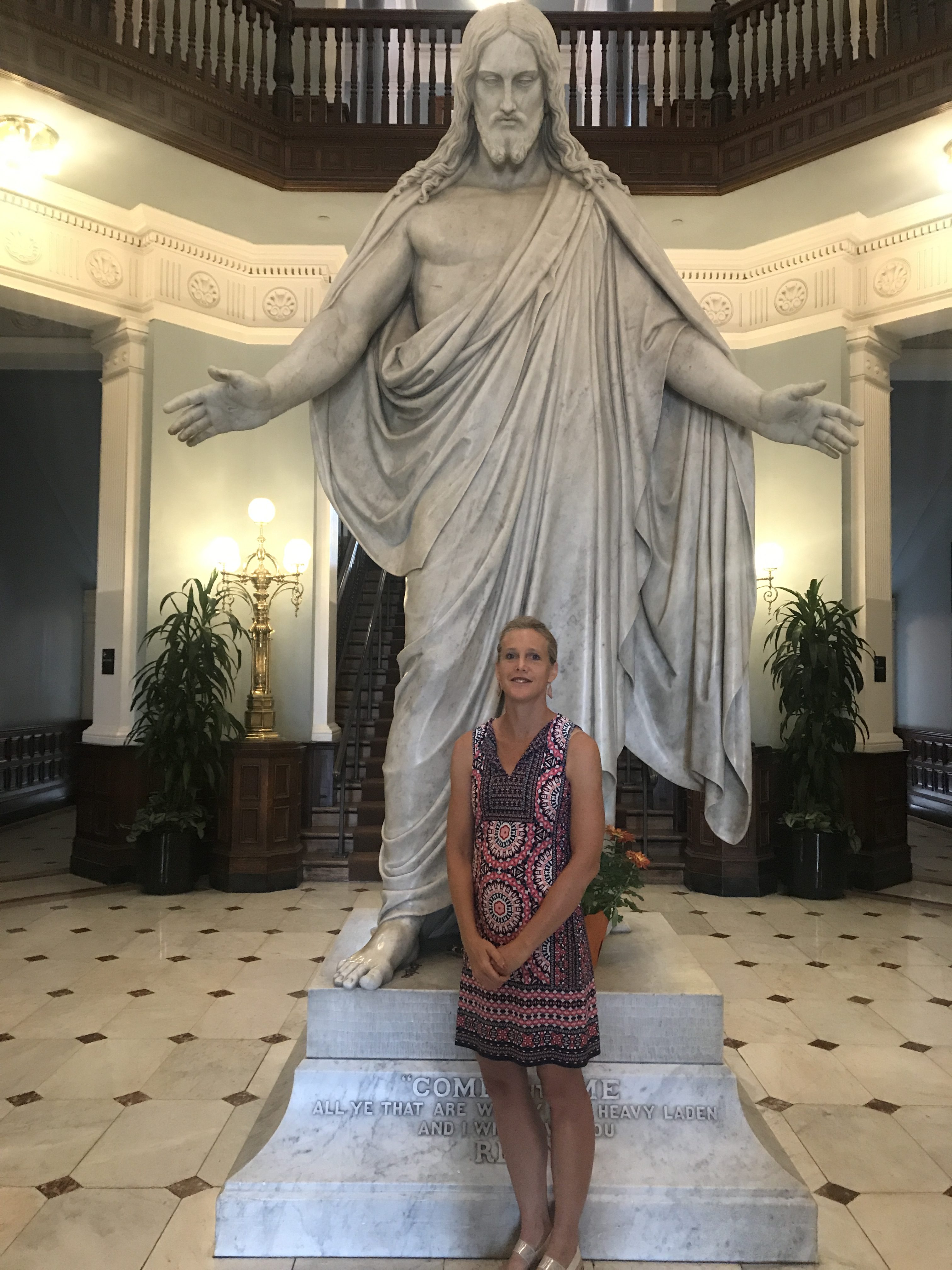 One of my favorite songs as a young girl was “Be Not Afraid.” I remember singing the lyrics in the shower and whenever I was anxious. They gave me great comfort, especially the chorus:

Be not afraid
I go before you always
Come follow me
And I will give you rest.

The last two lines come from Matthew 11:28, “Come to me, all you that labor and are heavy laden, and I will give you rest.” Perhaps it’s because depression feels like a set of weights holding down all your limbs that I was inspired and comforted by this verse and still am.

It’s no coincidence that at the two points in my life that I was most tempted to give up I found consolation in front of an 11-foot statue of Jesus in the Billings Administration building on the campus of Johns Hopkins University, called Christus Consolator. The words inscribed at the base read: “Come unto me all ye that are weary and heavy laden and I will give you rest.”

The first time I saw the statue was after 18 months of suicidal depression. I refused to seek additional help after the fifth or so psychiatrist I saw in Annapolis threw a bunch of antipsychotics and other prescriptions at me, changing my regimen every few days, causing biochemical mayhem in my body and mind. One morning I passed out in my cereal bowl and decided I was going to fix my thoughts with meditation, diet, exercise, and prayer.

The result was that my husband found me in a fetal position in our bedroom walk-in closet, totally incapacitated. I just couldn’t forge new neural passageways quickly enough.

To appease him, I agreed to a consultation at Johns Hopkins, which then resulted in my first hospitalization there.

We had to walk through the Billings building to get to the Meyer Building, home of the psychiatric department.

I stood in front of Jesus for a while, tempted to touch his robe like the hemorrhaging woman who got her miracle in the gospels of Mark and Luke. She had bled for twelve years, “had endured much under many physicians, and had spent all that she had; and she was no better” (Mark 5:26). Just by touching the hem of Jesus’ cloak, this ailing woman was healed of her disease, because her faith was so great.

“I believe, Jesus,” I said to the statue, imagining myself touching the hem of Jesus’ real robe. “I believe.”

Fourteen years later, my situation was different but tinged with the same pride and need to control my recovery. Hiking the 780 kilometers of Camino de Santiago was a beautiful, life-transforming experience but was simultaneously an attempt to take the helm and force healing when it needed to happen organically or with the right medical intervention.

Along the Spanish trails I tried desperately to form new neural grooves in my brain – to think and pray myself to peace. I so hoped that I would be miraculously healed of my illness by the time I arrived at the Cathedral of Santiago de Compostela and hugged the remains of St. James. When I wasn’t – when the pilgrimage proved to worsen my condition, not heal it–I completely fell apart, much like I did 14 years ago.

I did find rest each time I pleaded for a miracle in front of that statue and consequently trusted the Hopkins professionals. However, my healing never happened the way I wanted it to. The first time I did not want to be hospitalized. Mind control and acupuncture were much more appealing. The second time I was terrified of undergoing general anesthesia and being brought to seizure 13 times, part of my acute course of electroconvulsive therapy. A month of hospitalization — sharing a community shower and safety checks every few hours — felt like forever. I had wanted peace to come in my steps along the beautiful Spanish paths of Camino. However, both hospitalizations proved to be life-saving.

Healing has always required my getting out of the way instead of exerting more control. There are basic components of my recovery that contribute to resilience – good psychiatric care, exercise, healthy diet, sleep, self-compassion, prayer, community – but the most critical piece of all is surrender, a word I loathe.

Last week I visited two of my Hopkins angels – women that visited me regularly when I was in the hospital and provided immense consolation, inspiration, and laughs at a time when I was so depressed I nearly lost my sense of humor. It was the first time I returned to Hopkins since my hospitalization without wearing a white bracelet around my wrist. Before meeting the first friend I visited the Jesus statue and thanked the big guy for my healing. I looked at the roses and the gifts at the foot of the statue and knew I wasn’t alone in my offering of gratitude.

Then I went up to the psychiatric unit of the hospital to visit one of the patients I bonded with when I was there. He is one of the brightest and most determined people I have ever met — his presence reminding me that this illness has nothing to do with will power. If anyone had the power to reverse his situation by intellect and perseverance, it would be he.

“I know you feel like you’re going to be in here forever,” I said. “But you will get back to your life, and it will be a good life. You WILL get better.” Tears welled up in my eyes, thinking of all the people who had told me the same when I was sitting in his spot. I had to trust them until I could believe what they said.

I wanted to belt out the lyrics of “Be Not Afraid,” or take him to the Jesus statue. Instead I tried to communicate the message of Matthew 11:28 nonverbally.

I have no doubt Jesus is on it.

He will eventually find rest.

30 thoughts on “Come, All Who Are Weary: On Healing”