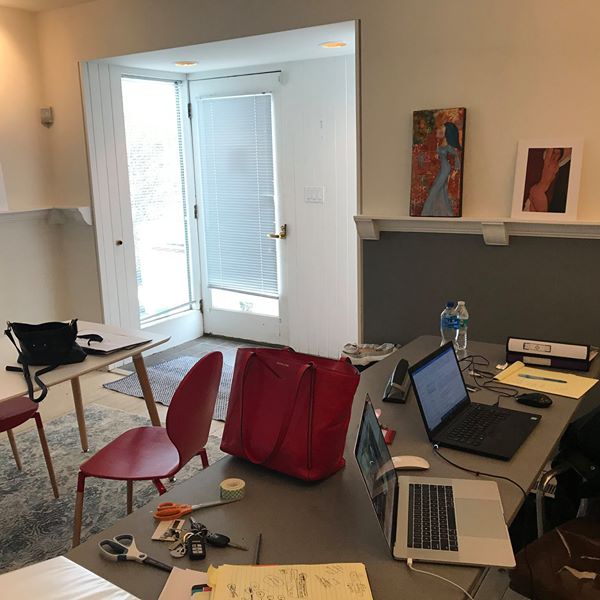 Virginia Woolf believed that if a woman was to write fiction that she must have money and a room of her own. I would say the same for a mental health blogger or anyone in a creative field. Money can be hard to come by. But a creative soul should at least have a fort or office somewhere in her home or in the neighboring vicinity that is hers alone, where she can hang up a “Do Not Disturb” sign. A space to spread out notes and books and journals for days or months on end until the project is finished is, in my opinion, critical to the creative process … and also to your mood.

Toenails, Laundry, and My Bedroom Office

When I left my full-time job at the start of the year, I was back to my desk in my bedroom. The white fold-up table is so close to the bathroom that it prevents the door from opening all the way. On the other side is the dirty laundry baskets. With my son clipping his toenails three feet from me and my husband whisking his dirty t-shirt over my head into the basket, you can imagine how hard it was to form a cogent sentence or to synthesize a study from the Archives of General Medicine. Spotify and earplugs only went so far to a create virtual reality.

One day, in tears, I informed my husband it would be best for our marriage and family life for me to have my own working space, a quiet room somewhere for my brain to wander off and get lost, four borders to protect me from the distraction of toe-nail clipping and dirty laundry. After exploring different options, I set up shop in the building next to his office, which was temporarily vacant.

Four Walls of Quiet and Creativity

Moving into my own office was transformative. I always knew that your environment affects your cognitive process and mood, but I hadn’t realized to what extent your surroundings can either breed or thwart creativity. My own four walls promoted better concentration and fostered imagination. The physical isolation seemed to generate synapses in my brain that helped me to conceive original analogies and be more deliberate in my prose.

Looking back, I’ve always needed space to create. Claiming it hasn’t always been easy. Toward the end of my junior year in college, I went against the wishes of three of my friends who wanted to go in a quad dorm room for our senior year. We could have scored a spacious, plush room on campus. However, I opted instead for a single. As a theology major studying the spiritual writings of the Christian mystics, I need a quiet space to absorb their wisdom, not Bob Dylan blaring in the background or someone chit chatting with her boyfriend on the couch.

Writing, at its best, is a lonely life. Organizations for writers palliate the writer’s loneliness but I doubt if they improve his writing. He grows in public stature as he sheds his loneliness and often his work deteriorates. For he does his work alone and if he is a good enough writer he must face eternity, or the lack of it, each day.

The Benefits of Silence

Surely, writers and creative folks require more space and quiet than the average person, but science shows that all humans benefit from a reprieve of noise. Our brains run like the Energizer Bunny. Even when we’re not engaged in a conscious activity, our neurons are synthesizing data and filing memories and making sense of stimuli. According to a roundup of studies by David Gross, silence bears neurological blessings, spurring new cell development in mice.

Imke Kirste, a biologist at Duke University subjected three groups of adult mice to three types of music: music, white noise, and infant mouse calls. A fourth group listened to two hours of silence per day. While the first three groups experienced some positive results, the fourth group developed new brain cells in the hippocampus regions of the brain, responsible for concentration, memory, and mood.

Another study published in Heart journal tested how the human brain reacts to different types of music, again using silence as the control between different music clips. Results showed that when compared to relaxing music, two-minute silent pauses between the music proved more relaxing on than the music. The effect of silence seems to be heightened by contrasting it with noise.

There’s also a sense of independence to be gained by having a room of one’s own. The day I carried my initial load over to my office, I felt as if I were graduating into adulthood, or becoming my own person. This sense of autonomy builds confidence and boosts your mood. It’s why mental health professionals encourage people with depression and other mood disorders to learn skills like balancing a checkbook. Just as new brain cells are born to mice in silence, they are generated in humans pursuing activities that make them feel more independent.

It involves an act of empowerment that combats the sense of learned helplessness, a theory conceptualized by psychologists Martin Seligman and Steven Maier in the 1970s — defining the way people feel when they believe they have no control over what happens to them. Every time I heard the clip of a toenail or caught sight of the mound of dirty laundry, I felt like a prisoner to my environment and sulked. The first strategy Seligman and colleagues provide to overcome learned helplessness is to “Change the likelihood of the outcome. Alter the environment by increasing the likelihood of desired events and decreasing of negative events.” In other words, remove yourself from the toenails and the laundry.

Virginia Woolf was wise beyond her years. Creative souls could certainly use some cash because their efforts usually won’t get them rich. But more importantly, they need a place of their own. In fact, we all do — as well as the silence that comes with it.

3 thoughts on “A Room of One’s Own: Why We Need Space and Quiet”