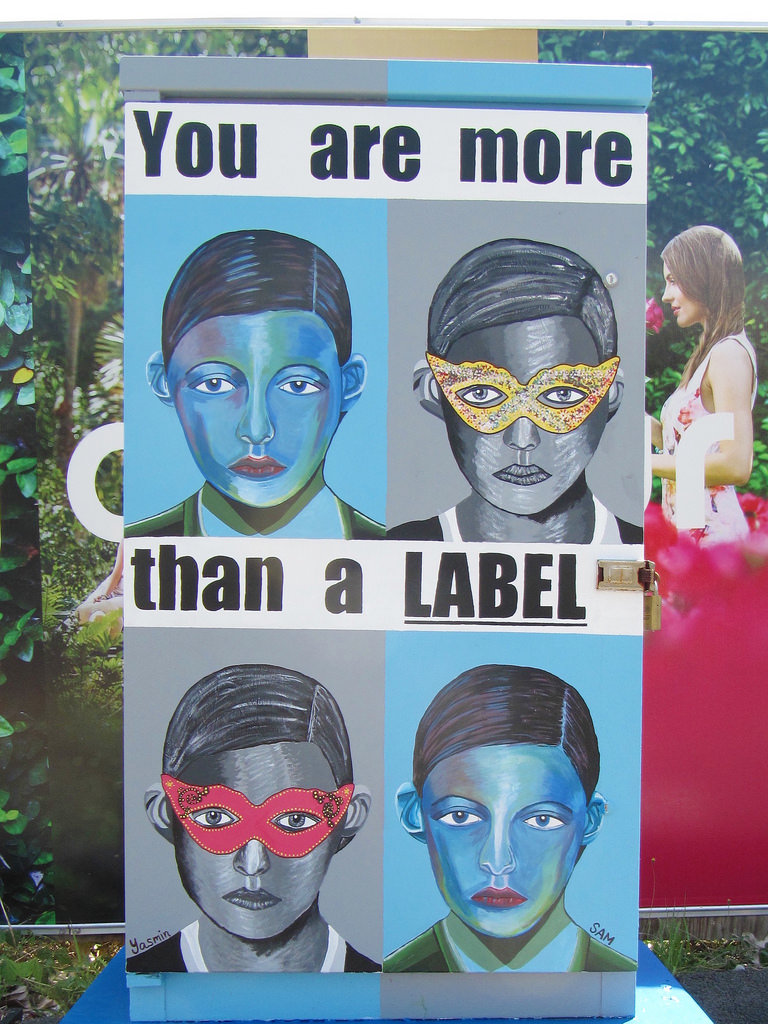 Hi, I’m Therese, I’m a recovering alcoholic, former smoker, and past anorexic; a depressive and bipolar; and a graduate of two inpatient psychiatric programs. I’m also intelligent, driven, compassionate, sensitive, creative, playful, and loving. Although the world has erected a solid wall between the above two statements, I’m on a mission to tear it down—not only for my sake, for everyone who has been treated differently courtesy of their labels.

For 12 years I have donned my labels as a reminder of my humble beginnings and as a means to serve others. I have dropped my perfect façade in order to confess struggles with insecurity, self-loathing, and addiction. Although my index finger hovers over the publish button for a good half-hour whenever I disclose an unbecoming quality, I feel empowered by sharing the intimate details of my life with readers in hope that they will feel less alone.

That’s not to say I have completely shed my shame. My labels are the landing spots in my psyche for those persons, places, things, or events that have the potential to embarrass or disappoint me.

In his compelling Tedx Talk, Rebranding Our Shame, psychologist Adi Jaffe discusses the power of our labels.

“We need labels to figure out what groceries to buy and which schools to go to,” he says. “We do well with physical labels. But when it comes to mental health, we really struggle … because we think a label comes with a certain amount of dysfunction. If you’re depressed, you can’t get out of bed. People with ADHD perform poorly in school. The drug addict leaves everything behind because getting high is the most important thing in the world.”

They are simple statements that often influence how we view a person. While labels can help us better understand our friends and relatives and co-workers–and lead to life-saving treatments–they can also shove a person into a confining box and draw thick lines around a personality. We absolutely need diagnoses, but they can generate stereotypes that indirectly attach shame where there should only be acceptance and understanding. Labels themselves aren’t so much the problem, rather the use of labels to dehumanize people– when we forget about the person underneath the diagnosis and when we forget that everyone is dealing with something.

Jaffe talks about how labels deter people from getting the help they need. A person would rather suffer in silence than admit to a diagnosable disorder and receive the proper treatment because he or she doesn’t want to be associated with the common stereotype. As wrong as that is, I sympathize with the person. The ugly truth is that wearing the label of bipolar of depressed or addict does provoke judgement and disdain. That’s no fault of the treatment team or the mental health field or the individual. It’s a fault of our society.

We have to be careful about the stereotypes we attach to certain diagnoses because such descriptions drive behavior.

It turns out even rats know when they’re labeled. In another experiment, researchers labeled some Albino rats as “maze bright” and some as “maze dull.” The rats labeled as bright learned the mazes 50 percent more quickly than those that were labeled dull. Says Jaffe, “The subjects we care about don’t even need to understand the labels we place on them to impact their performance.”

I recently completed a training on unconscious bias that made me realize the degree of difficulty involved in erasing certain stereotypes. In the exercise, you had to say out loud the word that showed up on the screen. A series of colors were presented: BLUE was printed in blue ink, RED in red ink, etc. No brainer. Until you had to say BLUE when it was printed in black ink, and RED when it was in blue. The exercise was surprisingly difficult and made me think about my unconscious associations with certain labels: bipolar, depressed, addict, etc.

The person beneath the diagnosis

Jaffe gives his audience two directives: Those wearing labels should take back ownership of what’s been placed on them—to take what fits and throw away the rest—and to build their own brand. Everyone else should take responsibility of the labels and stereotypes we attach to people, concentrating on the human being beneath the diagnosis and on his or her multifaceted dimensions.

“We need labels to help understand the world,” says Jaffe, “but we have to get comfortable with a much more nuanced, complex version of these labels. It’s up to us to introduce to the world the attributes and potential of the people who are labeled and stop considering them dysfunctional.”

It’s tempting to define persons according to their labels. That takes less brain power. It’s equally as tempting to divide the world into two groups of people: those with labels or issues, and those without. However, such a divide doesn’t exist. I don’t know of anyone without some kind of difficulty or challenge, only those who don’t publicly confess their issues in a blog or perhaps haven’t yet identified them.

Kudos to the brave ones like Jaffe, a former cocaine dealer turned psychologist and public speaker, who slap on a few – addict and ADHD sufferer — in order to help other people. Those are the people who inspire me.

“I don’t succumb to the shame I feel every day,” says Jaffe. “I’m not an addict. I’m not an ADHD sufferer. I’m way more than all those things.”

2 thoughts on “Rebranding Shame and Expanding Our Labels”