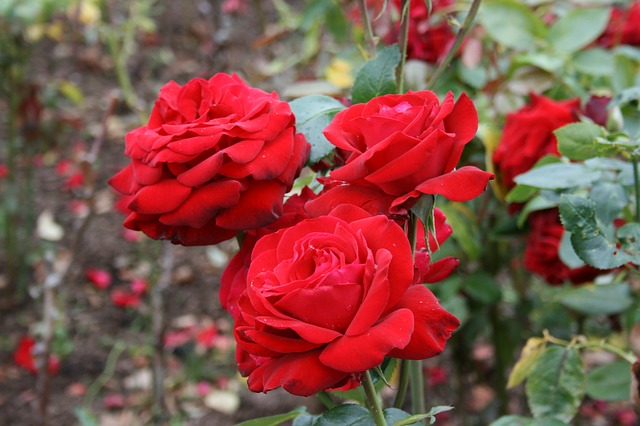 I was in fifth grade when I learned the power of heavenly signs.

My parents had just separated and my mother was despondent. She was praying a novena to St. Therese the Little Flower, whom I am named after. Tradition holds that on the fifth day of the novena, the person praying will receive a shower of roses.

Monet in the kitchen

On this day, our neighbor, Mr. Miller, who kept an impeccable garden, was pruning his rose bushes. As he trimmed off the blossomed flowers to make room for the tender buds, he noticed my twin sister playing soccer in the backyard.

“Give these to your mom,” he said, handing her at least eight dozen stunning roses in vibrant shades of sapphire, indigo, daffodil, primrose, and coral, most of the petals perfectly formed and having just opened. With the determination and skill of an artist, my sister went back and forth, from his garden to our kitchen, arranging all the roses until she ran out of vases and counter space, making the place resemble a Monet painting.

My mom dragged herself into the kitchen from the garage that evening, distraught and forlorn as she was so much of the time the year my dad left—the pangs of separation visible on her face—to find what looked and smelled like a heavenly rose garden.

I’ll never forget the tears of hope she cried when she remembered it was the fifth day of her novena.

I have prayed the novena many times in my life, or asked St. Therese for a rose, a sign that I would be okay.

I prayed it my senior year in high school, when I knew that I should quit drinking, but was scared to death to pledge a life of sobriety. On the fifth day of my novena, there was a knock at the door. A man stood in front of me with a bouquet of three beautiful red roses. On the card was written the last stanza of “The Rose”: “Just remember in the winter, far beneath the winter snows, lies the seed that with the sun’s love in the spring becomes the rose.” My high school religion teacher sent them to me, unaware of my prayers.

Then there was the time three weeks before my wedding. I was besieged with anxiety. Choosing a major was difficult for me, let alone committing to another human being for the rest of my life. Again, I prayed for guidance. My mom called a few days later to tell me that the rose bush that I had given to her and my stepfather three years ago, which had only produced two buds over the years, was a heavenly site with over 200 blossoms. At our wedding, the guests tossed those very petals in the air as Eric and I left the chapel.

More recently, when I was looking for a job and was frustrated by the process, I prayed for some heavenly assistance. A few days later, a former editor of mine, Rose, sent me an email wondering if I would be interested in an editing job.

It was with very wet eyes, then, that I sang the lyrics to “The Rose,” at the retreat my husband and I participated in this last weekend. As I’ve mentioned in past posts, the last few months have been a difficult season in our marriage, and I had been praying for some consolation, a sign that things would work out. When we entered the conference room on Friday night, I found roses on all the tables. Roses were printed on the handouts. And, as a closing song, we sang “The Rose”:

Some say love, it is a river that drowns the tender reed.

Some say love, it is a razor that leaves your soul to bleed.

Some say love, it is a hunger, an endless aching need.

I say love, it is a flower, and you its only seed.

It’s the heart afraid of breaking that never learns to dance.

It’s the dream afraid of waking, that never takes the chance.

It’s the one who won’t be taken, who cannot seem to give.

And the soul afraid of dying that never learns to live.

And you think that love is only for the lucky and the strong,

Just remember in the winter far beneath the bitter snows,

Lies the seed that with the sun’s love, in the spring becomes the rose.

I believe in signs

I realize many people might categorize my rose stories as a symptom of neurosis. Some would say that my interpretation of these life events are a desperate means to assign meaning to things that are just random coincidences. A prior therapist looked at me suspiciously and scribbled in her pad whenever I connected various symbols to God, the saints, deceased loved ones, or a world beyond ours. However, I am strong believer in signs and rely on them as a spiritual compass, to provide that extra reassurance when making hard decisions and to help direct my path in times of confusion.

Heavenly signs give me hope and consolation and assure me that I’m not alone. They remind me that there is always light in darkness, and that “far beneath the bitter snows lies the seed that with the sun’s love, in the spring becomes the rose.”

14 thoughts on “Roses From Heaven: The Power of Signs”