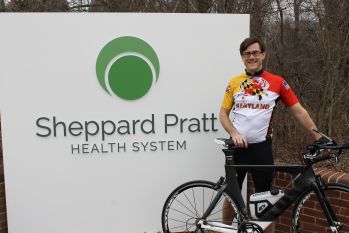 Some of the best physicians are wounded healers, those who have walked through the pain of depression themselves only to emerge on the other side to help others. Dr. Thomas Franklin is among them.

The following excerpt is from his his blog on Sheppard Pratt’s blog, Thrive, about telling his story in order to help others, fighting stigma, and becoming an ironman as part of his recovery.

I was a psychiatric intern at the time, and I was depressed. But I couldn’t bring myself to seek treatment. I suffered like that for months until I saw a colleague in consultation, where I described suffering the symptoms of attention deficit disorder, but suggested that a third-line medication for that diagnosis, also used for depression, might help me. I needed so much more than that medication, but my depression, my own inhibitions, and stigma kept me from getting the help I needed. Difficulty concentrating seemed a safer problem to admit to than depression. I was worried that I wouldn’t be taken seriously as a psychiatrist if it became known that I, too, was a patient.

I continued to suffer off and on for years, finally getting into real treatment for the first time after my training was over. A combination of psychotherapy and medications led to the relief of stabilization. Ultimately, psychoanalysis, a more intensive therapy experience, helped me to fundamentally change how I thought about myself and the world, which led to not just relief, but a transformation of how my mind worked. Eventually, I was able to stop taking medicines. The way I had felt only years before seemed so far away. I felt a part of the human race.

Until now, I have kept quiet about my experience. A continued fear of stigma has kept me quiet. I felt that if I was known as a psychiatric patient, even a so-called “cured” one, I would be labeled or disgraced or stereotyped. I thought it might hold back my career.

But the only way to combat stigma is to speak out. This is not easy, but I am inspired by those that have travelled before me on this road and by my current patients. I can’t go on urging them to be courageous, to face down the stigma they were feeling, without doing all I can to fight stigma myself. Only by shining the light of truth on people’s lived experience of mental illness will stigma finally become a thing of the past.

2 thoughts on “A Psychiatrist Tells His Story to Help Patients”