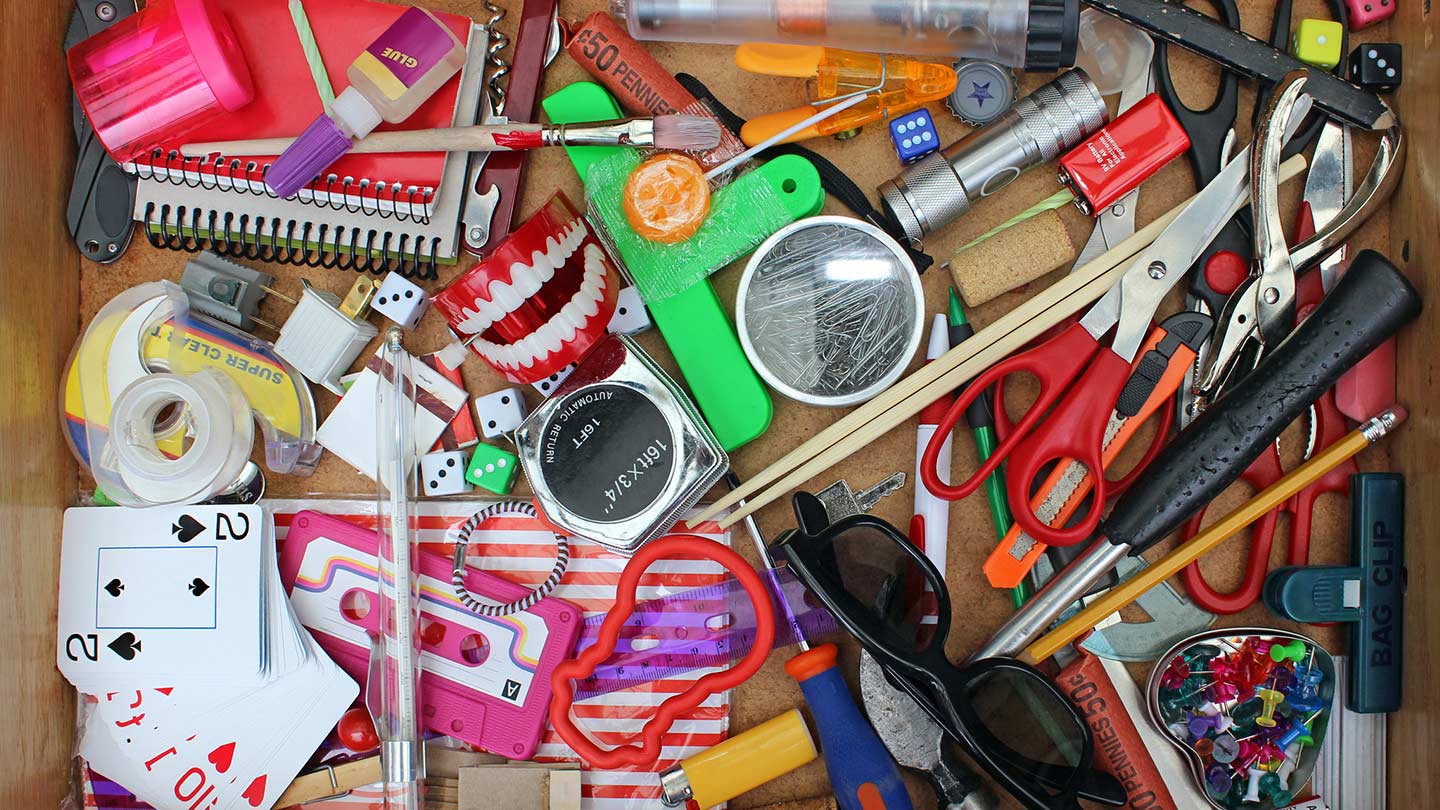 I feel like a massive hypocrite writing this piece, because substantial messes are found in virtually every square foot of my home.

In fact, the last time I broached the topic of clutter in a blog, I posted a photo of my book piles and nut collection and was immediately contacted by a hoarding show to be “fixed” by an expert.

Even though I fail miserably at decluttering my home, I do know it’s an important piece of mental health — that our environments affect us more than we’d like to believe. And it’s not even the Post-its all over your desk, the plastic dog toys strewn about the floor, or the homework on the table: It can be the 99 files on your computer desktop, or the 28,000 emails you haven’t deleted.

In our modern society, when we get lambasted with information — dozens of pieces of junk mail in our physical mailbox and more in our email, not to mention social media — it’s an awesome task to stay on top of the clutter, and most of us don’t.

UCLA’s Center on Everyday Lives of Families (CELF) studied the homes of 32 Los Angeles families over four years (2001 to 2005) and published their findings in the book Life at Home in the Twenty-First Century. The families were dual-income, middle-class households with school-age children and represented a wide range of occupations and ethnic groups.

But the results generated from almost 20,000 photos, 47 hours of family-narrated home video tours, and 1,540 hours of videotaped family interviews made clear one thing that virtually every middle-class American home has in common: lots of stuff.

The typical refrigerator in the study held 52 objects; the most crowded displayed 166 different objects (about half of the number of magnets on ours). In these homes, stuff covered as much as 90 percent of the fridge. According to a UCLA Magazine article explaining the study, “The Clutter Culture,” researchers noticed a correlation between the number of objects families put on the fridge and the rest of the stuff in their homes.

“The American workplace is intense and demanding. When we come home, we want material rewards,” says Elinor Ochs, director of CELF and a linguistic anthropologist. But the group’s study found that the bigger the mess, the more stress — at least for the moms interviewed.

In a report on their findings in the January 2010 issue of Personality and Social Psychology Bulletin, Drs. Saxbe and Repetti wrote:

In 2012, David Tolin, PhD, and his Yale School of Medicine research team recruited three groups of people — those with hoarding disorders, those with obsessive-compulsive disorder (OCD), and folks without any type of hoarding or OCD issue — to bring in a pile of junk mail from home. The pieces of mail were photographed, as were pieces of mail supplied by the lab.

Researchers had the participants lie in an MRI machine while viewing the photos and make a decision about which items should be kept or shredded.

Compared with the control and OCD groups, the people with hoarding disorders showed abnormally low brain activity in the insula (within the cerebral cortex) and the anterior cingulate cortex when they reviewed the lab mail. But the same brain regions lit up with hyperactivity when these people assessed their own possessions.

These are the same regions of the brain associated with pain, both physical and psychological. The more emotional attachment to an object, the greater the pain.

The results of the study were published in the August 2012 issue of Archives of General Psychiatry. As the abstract says, the people with hoarding disorders were the ones who experienced “not just right” feelings. In order to avert more anxiety or satiate their growing unease, they hold on to stuff. Dr. Tolin believes that hoarding bears more relation to autism and anxiety than to OCD, even though hoarding has long been considered a type of OCD.

“[Hoarding] isn’t a house problem,” Tolin was quoted as saying in Tara Parker-Pope’s blog in The New York Times. “It’s a person problem. The person needs to fundamentally change their behavior.”

How to Clear the Clutter

Again, I do not feel equipped to give advice here when I’m tripping over piles of books on the floor of my bedroom. But I like the behavioral tips offered by Dr. Gerald Nestadt, director of the Johns Hopkins OCD clinic, in an issue of The Johns Hopkins Depression & Anxiety Bulletin: