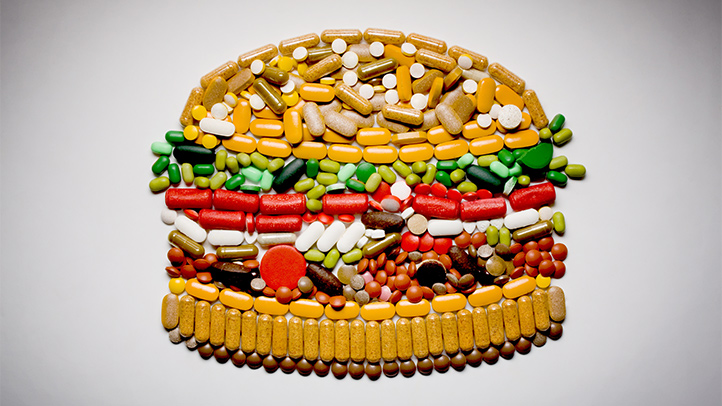 Weight gain is one of the main reasons that people diagnosed with depression and other mood disorders stop taking their medication. Some people gain as much as seven percent of their body weight — or more — from psychiatric meds. In a study funded by the National Institute of Mental Health that was published in July 2006 in the Archives of General Psychiatry, researchers reported that nearly one in four cases of obesity is associated with a mood or anxiety disorder. But following a strict treatment plan that involves meds doesn’t have to mean shopping for a larger pants size. There are effective ways to manage your weight on psychiatric meds. Here are some strategies that you might find helpful:

Skip the diet. Just limit your portions. Restaurants today tend to serve two to three times the amount of a healthy portion. We’ve added 570 calories A DAY to our diets since the late ’70s, and half of those calories can be attributed to large portions, according to research from the University of North Carolina in Chapel hill. In a Fitness magazine article, Lisa R. Young, PhD, RD, says, “Even though today’s serving sizes can be more than triple what the USDA recommends, they’ve become our new normal, and anything smaller can seem puny by comparison.”

I try to carve out an acceptable portion before I dig in, since it’s difficult to determine how much you’ve consumed otherwise. Sometimes I’ll use a smaller utensil to remind myself to savor the food and take small bites.

2. Eat Slowly and Chew Your Food

You’ve most likely at some point wolfed down a massive meal and felt fantastic until 15 minutes later, at which time you secure a few plastic bags because you’re convinced that you’ll explode on your kitchen floor. It takes an average of 20 minutes for your brain to recognize that your stomach is full — a definite waiting period between the time that the fork delivers its bite to the mouth and the bite’s arrival to the stomach. Getting in sync with this digestive schedule can not only save you from discomfort, but can also trim your waistline. If you take your time to savor the food, you’ll feel more satisfied by eating less.

This is one of the reasons that French people don’t get fat, according to a study from Cornell University in Ithaca, New York. They can better gauge when they’re full by using internal cues to know when to stop eating, unlike Americans who stuff their faces while watching TV or graze all day long, never sitting down for an official meal. The French may eat baguettes and brie, croissants and butter, and all the other forbidden foods, but they enjoy them at a table with friends or family.

Taking notes keeps you accountable for everything you put in your mouth. It’s all there on paper for you to read as many times as you want. Knowing that you’ll record everything as you’re stuffing your face with a pastry can be the difference between eating one chocolate croissant and four. You’ll also keep your momentum when you’re in a groove because you’ll see your progress as recorded in your journal. Finally, you can pick up on patterns of eating behavior during the month and connect binge eating to various stressors or other events.

Just as it’s difficult to stop smoking if you live with a smoker, it’s much more challenging to lose pounds when you’re surrounded by junk food addicts. You’ll be less tempted to snack on Twinkies if they’re not in your house. Obviously, you can’t put the people in your household on a diet with you, but there’s a level of support you can ask from them. You might also try an online or local weight loss support group to discuss weight loss challenges and frustrations.

It can be tempting to set a goal of losing five pounds every week — or some other unrealistic goals for weight loss — much like we set New Year’s resolutions that never stick. It’s better to be conservative and realistic. The safest rate of weight loss is between 0.5 to 2 pounds a week. Typically, if you lose weight at a slower, consistent pace, you tend to keep it off.

You don’t need to run a marathon to get a good workout. Walking up to 30 minutes, three to four days a week is often enough to get your heart rate up and your pounds off. Choose an activity that’s convenient for you to do on a regular basis, and make it part of your day. It’s best to set a consistent time and stick to it.

7. Tap Into Your Emotions

Often, eating isn’t about hunger. It’s about soothing some emotional wound. Food can be a powerful source of comfort to relieve stress, sadness, anxiety, loneliness, or boredom. But there are more effective ways to soothe uncomfortable feelings, like calling a friend, walking, or engaging in a support group. By recognizing the behavioral and emotional cues, you can better direct your angst.