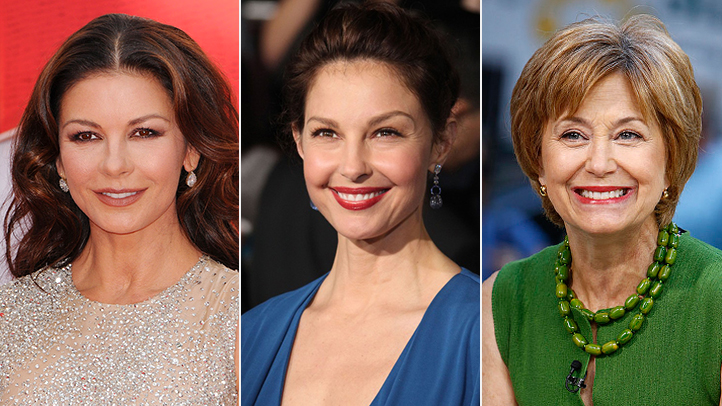 Whenever I hit a depression rut, where I feel disabled by the illness and therefore pathetic for being brought to my knees by a bunch of thoughts, it helps me to review celebrities — esteemed politicians, actors, musicians, comedians, astronauts, writers, and athletes — that I admire from both the past and present who have also wrestled the demons of depression and bipolar disorder. I feel less alone knowing that this infuriating condition doesn’t discriminate, and that I’m fighting alongside some of the world’s most talented and accomplished people.

Here are a few of the luminaries that have, over the course of their lives, shed some of the stigma of mental illness with their stories and who serve as inspiring role models for those of us in the trenches.

While visiting her sister, country singer Wynonna Judd, at a treatment center in 2006, counselors suggested that the actress and political activist check herself in, too. So Ashley Judd did just that and spent 47 days in a Texas treatment facility for depression and emotional problems. In a Today interview, she told Matt Lauer:

I was absolutely certifiably crazy, and now I get to have a solution. And for those who are codependent or suffer from depression, there is a solution.

In her memoir, All That Is Bitter and Sweet, Judd describes the abuse and neglect in her turbulent upbringing that led, in part, to her emotional pain and breakdown — and also the hope she feels by focusing on humanitarian work around the world.

Academy Award winning actress Catherine Zeta-Jones never wanted to become a poster child for bipolar II disorder after she went public with her illness in April 2011, but she has nevertheless become a beautiful face behind the disorder. I, for one, am relieved the world can make a connection between one of the most talented and glamorous movie stars and a misunderstood illness. I found it especially reassuring when she checked into a 30-day program in April 2013 to treat her disorder. The fact that a star can give herself permission to withdraw from the world in order to heal helps me feel less shame when I have to take a time-out for self-care myself.

Award-winning author Joshua Wolf Shenk did a masterful job of exposing the inner demons of the 16th president of the United States in his book Lincoln’s Melancholy: How Depression Challenged a President and Fueled His Greatness. I go back and read certain chapters whenever I need to be reminded that this curse can render gifts if we have the strength and perseverance to tame it, as Lincoln did. Shenk writes:

With Lincoln we have a man whose depression spurred him, painfully, to examine the core of his soul; whose hard work to stay alive helped him develop crucial skills and capacities, even as his depression lingered hauntingly; and whose inimitable character took great strength from the piercing insights of depression, the creative responses to it, and a spirit of humble determination forged over decades of deep suffering and earnest longing.

When the author of the runaway bestselling Harry Potter series was a struggling writer in her twenties — a single mother and newly divorced — she suffered from severe depression and contemplated suicide. She sought help through cognitive behavioral therapy, and after nine months, the suicidal thoughts disappeared.

“I have never been remotely ashamed of having been depressed,” she said in an interview on Suicide.org. “Never. What’s there to be ashamed of? I went through a really tough time and I am quite proud that I got out of that.” Today she doesn’t hesitate to talk about her depression in order to fight the stigma associated with mental illness.

Supernatural star Jared Padalecki openly talks about his struggles with depression and feels so passionately about supporting people battling emotional demons that he initiated Always Keep Fighting, his T-shirt campaign through Represent.com to benefit the nonprofit organization To Write Love on Her Arms (TWLOHA), which supports people struggling with depression, addiction, self-injury, and suicide. During filming of the third season of Supernatural, Padalecki broke down in his trailer after shooting an episode. A doctor soon diagnosed him with clinical depression; he was 25 at the time. Padalecki recently told Variety:

I, for a long time, have been passionate about people dealing with mental illness and struggling with depression, or addiction, or having suicidal thoughts and, strangely enough, it’s almost like the life I live as well. These characters that we play on Supernatural, Sam and Dean, are always dealing with something greater than themselves, and I’ve sort of learned from the two of them that they get through it with each other, and with help and with support.

Brooke Shields had just released her book Down Came the Rain in 2005 about her bout with postpartum depression when I plunged into a severe depression and was hospitalized. A friend sent the book to me, and I’ll always remember the relief I felt when I read the back cover copy — feeling as though this actress-model was giving me permission to feel the pain: “Sitting on my bed, I let out a deep, slow, guttural wail,” she writes. “I wasn’t simply emotional or weepy … This was something quite different. This was sadness of a shockingly different magnitude. It felt as if it would never go away.”

She also wrote a brave op-ed piece for The New York Times following Tom Cruise’s infamous rant with Matt Lauer on NBC’s Today about psychiatry, lambasting Shields and others for taking antidepressants. “Once we admit that postpartum is a serious medical condition,” she writes, “then the treatment becomes more available and socially acceptable. With a doctor’s care, I have since tapered off the medication, but without it, I wouldn’t have become the loving parent I am today.”

British Prime Minister Winston Churchill referred to his depression as his “black dog”: recurrent episodes of darkness that permeated his life, influencing his career and political leadership. Some people surmise that it was Churchill’s depression that ultimately allowed him to assess the threat of Germany. British psychiatrist Anthony Storr writes:

Only a man who knew what it was to discern a gleam of hope in a hopeless situation, whose courage was beyond reason and whose aggressive spirit burned at its fiercest when he was hemmed in and surrounded by enemies, could have given emotional reality to the words of defiance which rallied and sustained us in the menacing summer of 1940.

He was born into a family of mental illness, and his daughter Diana committed suicide in 1962. Still, he managed to lead the United Kingdom as prime minister from 1940 to 1945 and again from 1951 to 1955, to thrive as a writer and historian, winning the Nobel Prize in Literature, and to be the first person to be made an honorary citizen of the United States.

He was one of the most successful newspaper columnists of his time, the recipient of a Pulitzer Prize, and a comic genius. But I appreciated Art Buchwald most as one of the three “Blues Brothers” (with Pulitzer Prize winner William Styron and former 60 Minutes reporter and cohost Mike Wallace), who spoke and wrote publicly about his bouts with depression and bipolar disorder.

Buchwald was hospitalized for clinical depression in 1963 and for manic depression in 1987. He was suicidal both times, and credited prescription drugs, therapy, and the hospital staff for saving his life. Had the nurses not been there to “rock him like a baby” during his harrowing dark night, he said he believed he might not have survived to see the light at the end of the tunnel.

Amanda Beard seemed to have the perfect life: four Olympic medals by age 18 and a promising modeling career. But in a People interview, she confessed that when she went home, “it was just darkness.” Her self-loathing led to bulimia, cutting herself, and depression. In September 2005, Beard began taking antidepressants and seeing a therapist. “It’s not like I went to therapy and — poof! better,” she said in the interview.

Today she’s off her medication, and she hasn’t cut herself since 2008. I admire that she’s real about the enduring struggle. “Even today I have my issues,” she says, “The key is saying, ‘Let’s enjoy this — life is short.’”

Jane Pauley, the former host of Today and Dateline NBC, was diagnosed with bipolar disorder in 2001 and wrote about her illness in her 2004 memoir, Skywriting: A Life Out of the Blue. During a leave from the network, she was admitted to a psychiatric clinic and treated, but no one at the time knew about her struggles. Now she is outspoken about living with bipolar disorder and depression and raises awareness about mental illness. In a 2004 Today interview, Pauley explained that her diagnosis was a shock and a relief. She believes it surfaced due to a combination of antidepressants and steroids she took for a case of hives. About taking lithium, she said to Matt Lauer:

It just is stabilizing. It allows me to be who I am. A mood disorder is dangerous. You’ve got to get those dramatic highs and lows stabilized. It’s dangerous if you don’t.

3 thoughts on “10 Celebrities with Depression, Bipolar Disorder, or Both”