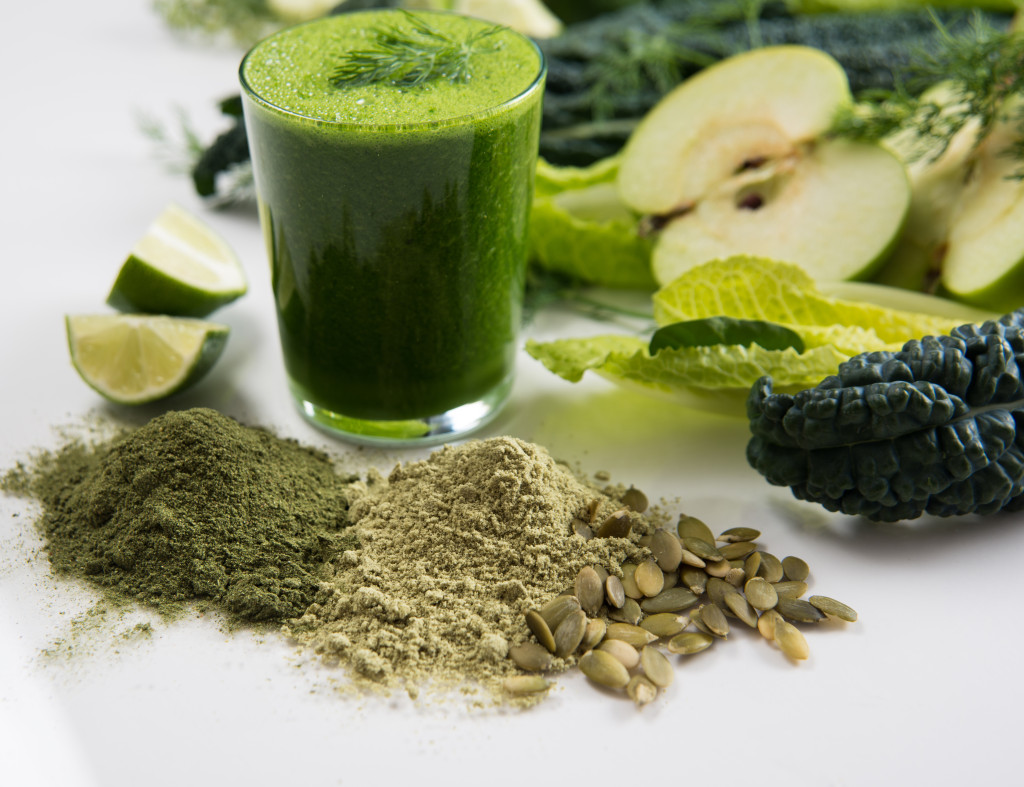 I have mentioned in some of my posts that drinking a green smoothie is among one of my more effective sanity tools. For fear of sounding like an infomercial, I must say that I realize there is no simple cure for depression. However, I do think chugging down two or three of these leafy-green concoctions a day has significantly impacted my health and began the healing process for some of my conditions.

The Benefits of Green Smoothies

“Greens are the primary found group that matches human nutritional needs most completely,” explains Victoria Boutenko in her book Green for Life. They are nutrition powerhouses, packed with vitamins A, C, E, K, and folate; minerals like iron and calcium; carotenoids; antioxidants; omega-3s; and phytochemicals. Greens provide insoluble fiber, which is like a miraculous sponge, helping us to eliminate pounds of toxins regularly. They balance our pH levels, leaving our body more alkaline, and are a major source of chlorophyll, which, according to Boutenko, “heals and cleanses all our organs, and even destroys many of our internal enemies, like pathogenic bacteria, fungi, cancer cells, and many others.” In the book, you’ll read smoothie testimonials from people who have been able to get off breathing machines, sell their wheelchairs, recover from a stroke, and heal from cancer.

We could eat kale, Swiss chard, and spinach, of course, but many of us—and especially those who have been on different medications for decades like me—don’t have the stomach acid required to break down and process all the nutrients from the greens. Even for folks that do, it’s difficult to invest all the time we need to actually chew our food as we really need to in order to get the nutritional value from the greens. When they are chopped and blended into bitty pieces they absorb more easily into our digestive systems.

How many of these things do you need to guzzle in order to feel any benefits? Boutenko recommends that we consume one to two quarts (liters) of green smoothies a day in addition to existing diets. That’s four to eight cups.

Folks have been asking me for recipes, so I’m starting you off with a few simple ones.

I would recommend you start with more fruit and less greens (at least half and half) and graduate to a smoothie with more greens than sweet stuff. I started out hard core, of course, and was pretty disgusted off the bat. Then I introduced more fruit and eased into this gig. Now I can tolerate more greens. If you Google “green smoothie recipes,” you’ll get over 8 million results! So don’t stick to these if you find you feel better drinking this stuff. There is a whole new world ahead of you. I would start by visiting these two sites dedicated just to smoothies: simplegreensmothies.com and incrediblesmoothies.com.

Unfortunately the smoothies are going to taste a lot better if you prepare them with a power blender, like a Vitamix or a BlendTec, but I realize that is an investment. My husband bought a refurbished Vitamix off Amazon for $500 two years ago. At the time, I was not happy at all about that. But given that I use the thing a few times a day, it has proven to be one of the best investments we’ve made.

Boutenko says it’s important to rotate your greens, to not drink the same smoothie every day. That way you avoid a buildup of alkaloids from the same plant and you get a variety of different nutrients.

This is my staple, the one I keep going back to, because it’s the easiest and the one with which I began this venture.

This is my second staple because, again, it’s simple. When I’m at the store, I buy a bunch of bananas, peel them, cut them up, and freeze them. I find that the frozen fruit tastes better in the smoothies.

When I can make it to Whole Foods, I buy Swiss chard because it always tastes good in a smoothie and it’s incredibly nutritious. I like to blend it with berries, but warning: the color isn’t appealing. Just imagine it is chocolate.

You don’t think of spinach and chocolate as a happy marriage, but let me tell you, this one tastes ALMOST as good as a Dairy Queen shake. Spinach, of course, is a wonder food, but did you know just one tablespoon of unsweetened cocoa powder contains 3 to 9 percent of the recommended daily intake of essential minerals like iron, manganese, magnesium, and zinc? It’s a win-win.

To be honest, I’m not really after the skin side effects from drinking green smoothies, but people have told me my complexion looks better. I liked this smoothie from SimpleGreenSmoothies.com because it was, well, simple, and because avocadoes are a mood-boosting food

This is one of my favorite green smoothies from the site IncredibleSmoothies.com.

Boutenko includes of 30 green smoothie recipes of her own in her book. This is her husband’s favorite.

6 thoughts on “7 Easy Smoothies That Will Boost Your Mood”