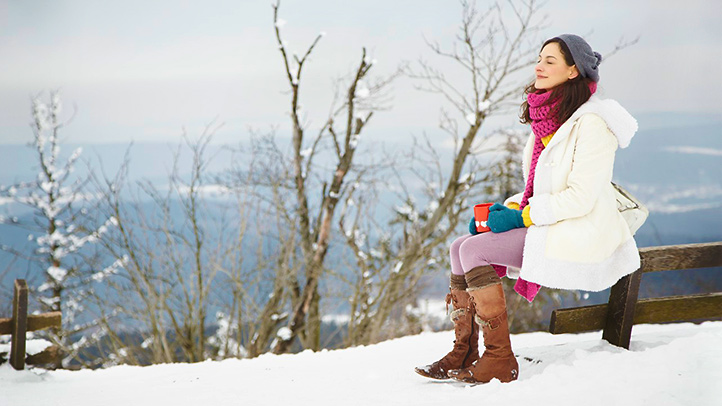 People with Season Affective Disorder (SAD) or the clinical version of the winter blues aren’t the only ones who struggle with the shorter days, colder weather, and the general blah of the winter season. Less sunlight can affect our circadian rhythm, the body’s biological clock that governs certain brain wave activity and hormone production. If you’re human, chances are you have woken up on a gray, wintry day and wanted to stay in bed. For older people and for folks with chronic illnesses like Raynaud’s phenomenon who are sensitive to the cold, it’s even tougher. I am not a huge winter fan, so I have to work extra hard on my mental health during the colder months. Here are a few techniques I keep in mind.

I learned an important lesson the year I lived in Minneapolis—during the blizzard of 1996, when snow hit the ground in October and didn’t leave until the end of May. These people adapt! They love it. They make a trip to L.L. Bean in the fall, get all the necessary gear, and go ice-fishing, ice-skating, snow shoeing, and do everything in their power to appreciate the very elements that I cursed. By February I couldn’t take being inside anymore, so I followed suit. I started running in the snow, having fun with the ice cycles that would form inside our car, throwing up a pale of water and watching it come down as snow from our apartment balcony. Once I tried to act like a Minnesotan and stopped resisting the cold temperature, the better I tolerated it.

I have no research supporting this theory, but I’m quite convinced there is a link between feeling optimistic and sporting bright colors. It’s in line with “faking it ’til you make it,” desperate attempts to trick your brain into thinking that it’s sunny and beautiful outside–time to celebrate Spring!–even though it’s a blizzard with sleet causing some major traffic jams. Personally, I tend to wear black everyday in the winter. It’s supposed to make you look thinner. But the result is that I appear as if and feel like I’m going to a funeral every afternoon between the months of November and March. So I make a conscious effort to wear bright green, purple, blue, and pink, and sometimes–if I’m in a rush–all of them together.

2 thoughts on “10 Ways to Fight Off the Winter Blues”