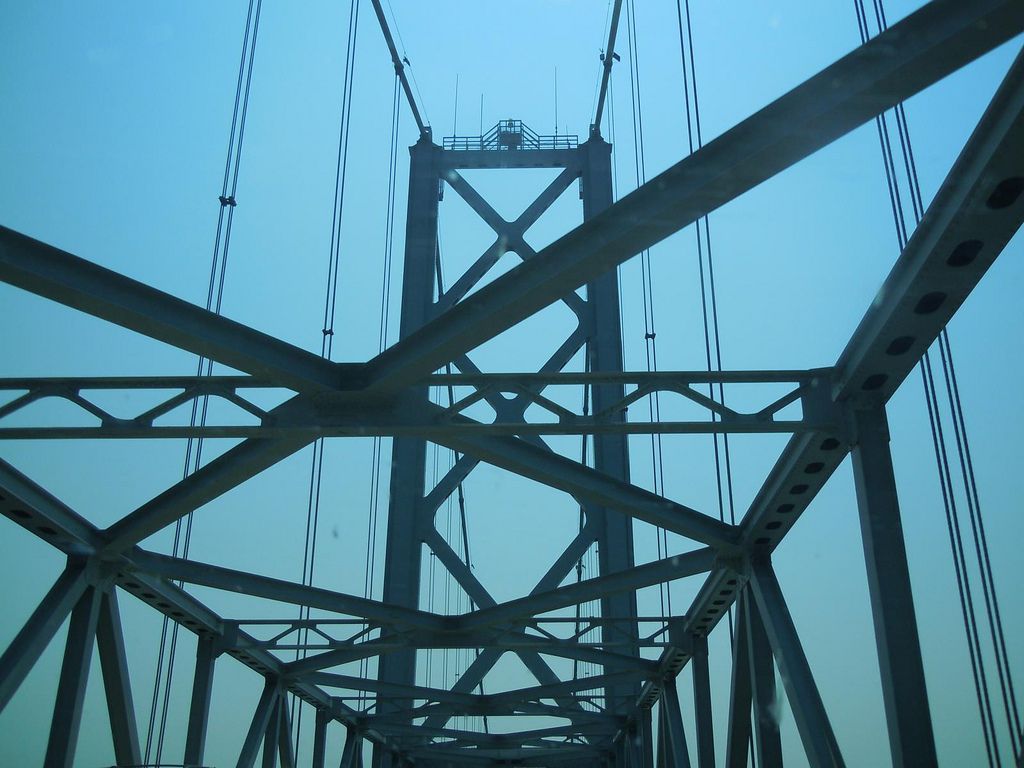 We all have them–fears, phobias, anxieties—that shorten our breath, quicken our heartbeats, and sometimes can outright disable us. Some of us shut our eyes and hold our breath as we ride the elevator to the tenth floor of an office building, while others pray the Rosary inside that coffin-like enclosure when getting an MRI. I am afraid of heights–in particularly driving over the Chesapeake Bay Bridge.

It doesn’t look all that menacing, but the structure spans over 4.3 miles and reaches to 200 feet high in places. I’m obviously not alone with my jitters, because two years ago Inside Edition did a story on it, calling it quite possibly the scariest bridge in the world. It was also on Travel + Leisure’s list of the 10 scariest bridges in the world – the only other two American bridges being the Mackinac Straights Bridge in Michigan and the Royal Gorge Bridge in Colorado.

The Bay Bridge connects Maryland’s eastern and western shores (Annapolis is on the western shore), so kids’ sporting events on the eastern shore present a real problem for a mom with gephyrophobia (a fear of crossing bridges–yes, there is a word for us!). Usually I would make my husband take off work to drive either Katherine or David across the bridge. But the other night he was out of town, so I was forced to face my fear, which is usually the way phobias are addressed.

I followed these four steps as my strategy, which I thought might help you because I realized (once I was on the other side) that they actually apply to everything we don’t want to do and to living with depression, in general.

1. Focus on the Yellow Lines (Or What’s Right in Front of You)

This is true of so many things—if we can keep our view on just what is in front of us, instead of the really high span a mile ahead, we have a better shot of staying calm. Ironically, when I swam UNDER the bridge—in which people freak out, as well, because at places you are swimming in 174 feet-deep water–someone told me to count the concrete constructions along the way, to never try to gauge how much distance to the other side. It was sage advice. Whenever I looked up and tried to figure out how much water to the shore, my breath became more labored and swimming became much more difficult. But if I could concentrate on counting my strokes and the constructions along the way, I made better time toward the shore, and I forgot that I was a mile away from land on each side. When driving over the bridge, I did much better when I kept my gaze down at the yellow lines. This is also true if you are in the midst of a depressive episode. I always tell people to take it 15 minutes at a time, no more.

Conquering your fear is much easier when you have some cheerleaders to accompany you. This is true when you challenge yourself in any regard, from running a 5K to giving a talk at an event. I remember the time when a friend of mine couldn’t get into an elevator of skyscraper in New York City until my sister offered to ride up with her. “Mom, this is not that big of a deal,” my son reminded me as we paid the $4 toll to get across the bridge. Of course, the cheerleaders can also distract you, which is a plus, like on the way back when my kids were fighting over a Chick-Fil-A milkshake, grabbing it out of each other’s hands just as we reached the highest part of the bridge. My attention turned from the little yellow lines to screaming, “Stop it already! Can’t you see Mom’s not having fun?!”

In addition to counting the yellow lines, I practiced a modified Pranayama, the first breathing exercise of Bikram yoga. Obviously my hands were on the steering wheel and I couldn’t throw my head back, but I inhaled to a count of six breathing in through my nose and then exhaled to a count of six breathing through out my mouth. When you breathe deeply, you stimulate your vagus nerve, a long nerve that extends from our medulla oblongata, located in the brain stem, to the stomach and links our two nervous systems (the central nervous system and the peripheral nervous system). It is often considered a bridge between between our conscious minds (“I am driving across a really high bridge”) and subconscious minds (“I’ll never be able to overcome my fears”). By stimulating the vagus nerve and the parasympathetic nervous system, we release anti-stress enzymes and hormones such as acetylcholine, prolactin, vasopressin, and oxytocin.

The first thing that happens when we panic is that our breath grows shallow and the loss of oxygen sends an alarm throughout our body that we are in harm’s way, which further paralyzes our thoughts and our biological systems. Stopping this reaction as it is happening is much more difficult than keeping it from happening to begin with, so it’s best to slow your breath from the beginning and make sure you keep it at a deliberate, measured pace until you’re on dry land or out of the elevator.

I was very glad that a friend asked me to watch Bob Newhart’s video “Stop It” last week before I attempted the bridge drive. I apologize in advance if anyone finds the video offensive, but for those of us who have endured some really bad therapy sessions and have fears that make absolutely no sense, it is a welcome comic relief. The woman who comes in for therapy is afraid she is going to be buried in a box alive, and Bob simply says, “STOP IT!” She goes on to say she has bad relationships with men, is bulimic (I realize this is sensitive, but I also had an eating disorder and I appreciated the humor), and a list of other things, and all he says is “STOP IT!”

At the highest point of the bridge, I did begin to panic a little and feared that I was going to have a bona fide panic attack. “What if I can no longer control my foot and I accidentally hit the accelerator, smashing us into this truck in front of us, and we go over the side,” I thought to myself. “Maybe I should open all the windows now so that the kids and I can climb out because the weight of the water will make it impossible for me to punch through the glass …” The ruminations were just beginning when I said to myself, “STOP IT!” and laughed, remembering the video. “This is insane. Just STOP IT!”