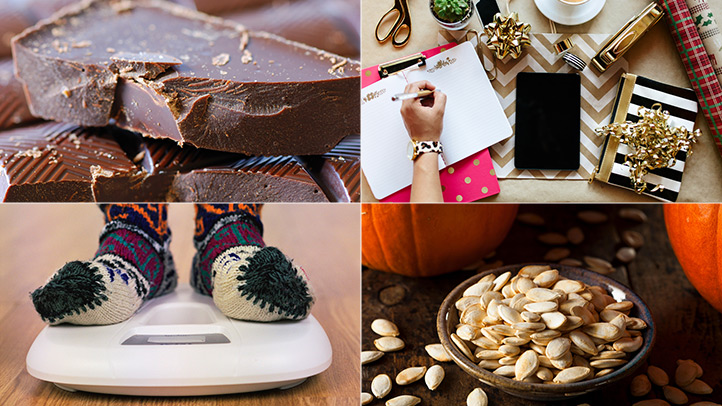 For anyone with an inclination to use food as comfort—which basically includes all of us—the two months between Halloween and New Years provide one temptation after another. For me it starts the hour the trick-or-treaters have left and I assess the supply of tootsie rolls, Kit Kats, and Reese’s Cups that did not make it into the pillow cases or plastic pumpkins of our guests. I tell myself they are absolutely off limits as I climb up on the kitchen counter to hide them in a place that requires much physical effort to get to. Then come all the holiday festivities where everything I am not supposed to be eating and drinking (sugar, gluten, dairy, alcohol) is there, available, in my face, taunting me … “come on, you know you want me … I can make you feel better.”

For many of us, the holidays are filled with stress, and the easiest, safest, most affordable place to relieve that stress is in a plate of mashed potatoes or pumpkin bread, a box of Christmas cookie, and lots and lots of red wine. I always think about the scene from Mall Cop when emotional eater Paul Blaurt (Kevin James) is spreading peanut butter on his bread, saying “Pain, go away.” However, for many of us, the more we give in to the patterns of emotional eating, the deeper our pain gets, especially for those of us who are intolerant to sugar, gluten, dairy, and alcohol—which is a high percentage of persons who struggle with chronic depression and anxiety.

But if you’re prepared with some action items, it is possible not to get trapped into emotional eating, even during the holidays. Here are a few ways you can avoid turning to food for comfort and exercise discipline during the self-indulgent season of the year.

1. Nibble on Dark Chocolate in the Morning

When I was newly sober, my sponsor told me to eat chocolate or enjoy a chocolate milkshake whenever I had a craving to drink. She was mostly right. Since sugar can often cancel out the beneficial properties of this food, it’s best to aim for dark chocolate that is at least 85 percent or higher cocoa. Dark chocolate often satiates the urge to engage in addictive behavior for a few reasons. First, it has one of the highest concentration of magnesium in a food, with one square providing 327 mg, or 82 percent of your daily value, and magnesium is our calming friend. According to a study in the journal Neuropharmacology, magnesium deficiencies induce anxiety, which is why the mineral is known as the original chill pill. Dark chocolate also contains large amounts of tryptophan, an amino acid that works as a precursor to serotonin, and theobromine, another mood-elevating compound. I find that eating a few squares of Lindt’s 90% Cocoa EXCELLENCE bar a day—often times in the morning— quiets on my impulse to binge the rest of the day on sweet breads and chips and the Reese’s Cups up above the kitchen cupboards that are terrible for my mood. Maybe this is related to research from Tel Aviv University that showed that including dessert as part of a balanced 600-calorie breakfast full of protein and carbs could help dieters lose weight and keep it off.

Dark chocolate is one of my safe, comfort foods. Four squares of my 90% Cocoa Lindt bar is a serving, so I allow myself to have four most days—especially during the eating season of November and December. In order to keep your hands away from the problem foods, it is best to have a supply of comfort foods that you can eat. Here are some others of mine:

3. Bring Your Own Food to Parties

If you’re invited to a party where you know there is going to be a spread of foods that you want to binge on, prepare a dish ahead of time that you know you can eat—and eat a lot of. For example, recently, I knew we were going to this party where I would be tempted to gorge on a coconut cake that my friend was making. It’s my weakness. So I made a really delicious kale salad (with the right ingredients, it doesn’t taste like something nutritious!) and filled my plate with it. I also took a bottle of sparkling water, in case my friend didn’t have any non-alcoholic beverages, and a bar of dark chocolate. I did binge on the kale, sparkling water, and dark chocolate, but managed to control myself from inhaling the other items that were telling me that they could take my pain away—like the coconut cake.

Keeping a food journal seems like a lot of work, but it is going to help you in several ways. First, it makes you accountable. Ever since I started to record everything I eat, I have been much more aware of what I put in my body. As I’m grabbing for a few sips of my daughter’s chocolate milkshake, I am thinking about the journal and how I will have to record what is about to go in my mouth. It also helps you connect the dots between your diet and your mood. That’s how I realized that sugar, more than anything other ingredient, was causing my mood swings. For two or three days after a slip, depression revisited, so I knew there was a cause and effect between the food and my negative ruminations.

Finally, it’s not a bad idea to leave some room in your food journal to write about your thoughts. Journaling has been proven as an effective, inexpensive form of stress relief. Often times, when we record our thoughts, it gives us an opportunity to assess them and to let them go. For 20 years, Dr. James W. Pennebaker, professor of psychology at the University of Texas in Austin has been studying the effects of journal writing. “When people are given the opportunity to write about emotional upheavals, they often experience improved health,” Pennebaker says. “They go to the doctor less. They have changes in immune function. If they are first-year college students, their grades tend to go up. People will tell us months afterward that it’s been a very beneficial experience for them.”

5. Sit Down When You Eat and CHEW Your Food

One of the reasons that French people don’t get fat, according to a Cornell study, is that they can better gauge when they are full; they use internal cues (“I’m no longer hungry”) to know when to stop eating, unlike Americans who stuff their faces while watching TV or graze all day long, never sitting down for an official meal. The French may eat baguettes and brie, croissants and butter, and all the other forbidden foods, but they enjoy them at a table, their butts on a chair, with friends or family. They also chew and savor their food, which allows for better digestion—and an earlier signal of when to stop bringing the fork to the mouth. Next time you are tempted to eat something standing up—in transition here or there—stop. Instead, put the food on a plate and take it over to a table, being mindful of the experience of eating.

Like any addiction, distraction is often the best antidote for emotional eating. Let’s say you’re in the kitchen right after your neighbor has just dropped off a batch of Christmas cookies. GET THE HELL OUT OF THERE. Sorry, but if sugar is as addictive to you as it is to me—and makes you feel has horrible as it does me—you can’t put yourself in danger like that, not during the holidays when there is enough to drag you down. So go to another room and start surfing stupid YouTube videos, like this great version of the 12 Days to Christmas or the Classics of Saturday Night Live. Begin a trashy novel or do some other mindless activity that will allow you to forget about the cookies for awhile, until you can reenter the kitchen with a little more resolve.

7. Find Another Comfort Item or Activity

Food is a perfect comfort activity because it is so easy and its effects are immediate. Ben & Jerry’s gives us a carbohydrate high by the time we dig into the pint for our second bite. However, if we can swap that behavior for another comfort activity, we can train our brain to go somewhere else for comfort. Other possibilities: yoga, exercise, journaling, reading spiritual literature, meditation, online support groups, twelve-step meetings. Going on a nature walk is almost as easy as opening the fridge, and according to recent research it reduces ruminations and boosts feelings of well-being. Developing a regular yoga practice in the last two months has definitely helped me to control my addictive tendencies. Other people I know swear by swimming or running. Still others, meditation.

8. Get an Emotional Eating Buddy

You might not need to a support group to rein in your urge to binge. Maybe you just need to talk to someone else who struggles with the same, especially during the holidays, someone to email when you feel the urge to deal with some upcoming stress by stuffing your face with everything in your pantry with an okay expiration date. You probably know of someone. If you don’t, you might want to check out ProjectBeyondBlue.com, and look for someone who speaks your language, a fellow foodie with whom you can exchange messages to keep you accountable and give you some support.

9. Weigh Yourself Every Morning

I know this step seems cruel, especially in November and December. But it’s about accountability—like recording everything you eat into a journal. A recent study published in Health Psychology led by Jessica LaRose, Ph.D., an assistant professor of social and behavioral health at Virginia Commonwealth University School of Medicine, found that the overweight or obese adults who weighed themselves every day in her study, over the course of 18 months, lost more weight, on average, than those who didn’t. The researchers found no increase of disordered eating among the group that checked their weight every day. Regular feedback contributed to a sense of continued awareness and self-reinforcement, which further promoted behavioral changes.