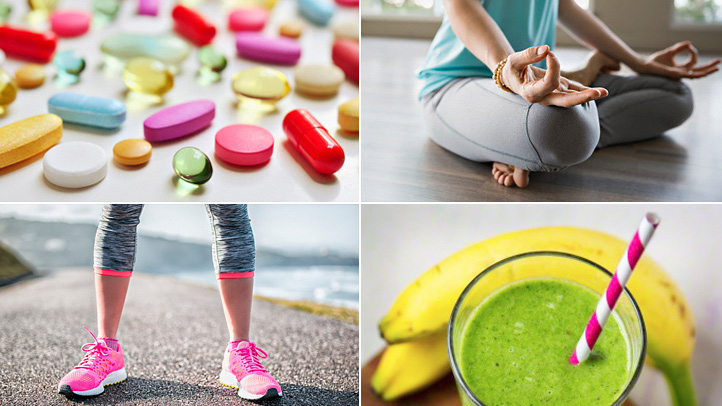 When I was six months pregnant, I attended a birthing preparation class with my husband and about twelve other expectant parents. During the fifth session, the instructor asked the mothers whether or not they were going to use medication to get through the pain of childbirth labor.

I looked at the two groups, which held about the same number of people. My head went from one to the other much like a puppet with a tic. Like most decisions in my life (including which dressing I want on my salad), I had analyzed the hell out of this one—done all the research on both sides—and still couldn’t commit.

“What a feeling of triumph to be able to do it without drugs,” I thought to myself. “I could wear a t-shirt for the rest of my life that said, WOMAN WARRIOR–I GAVE BIRTH NATURALLY.” But I also knew that acute pain—just like severe depression– has devastating effects on the body, that white-knuckling it isn’t always the heroic thing to do. Plus I’m not a huge fan of pain. I try not to bring it on when I don’t have to. I could myself wearing the other t-shirt: PAIN IS NOT MY FRIEND: I CAVED TO THE EPIDURAL.

I walked up to the two groups and stood in the middle of them.

“I’m undecided,” I explained to both camps who glared at each other with disdain.

I have tried my best to stayed in that spot–in the middle, gazing at the opposing sides from my peripheral vision–for most of my life as a mental-health blogger. I believe that the center is by far the most interesting place to be because you get to read the memos from each group and decide whether or not you agree.

But it also gets lonely.

Because the world of medication is so divisive–especially when it comes to using antidepressants or any kind of psychotropic medication to treat depression and anxiety. There is the camp that believes anyone who uses them are avoiding the hard work that has to be done to move beyond sadness–that they are agents of evil, poisoning our systems with harmful toxins. And there is the camp that believes that medication is the one and only way of treating depression, that mood disorders are strictly biological and can’t benefit from any introspective work, that they are in no way influenced by one’s diet or life-style habits.

For the first ten years of my blogging life, I was publicly pummeled for “copping out” and popping pills. People called me irresponsible for disseminating harmful information to the public, accused me of sleeping with Big Pharma (even though I never saw any cash), of being weak, small-minded, and caving to a popular culture that says good health is only one prescription away. I have never believed that medication alone will heal you from depression, that a script is all you need to get to sanity. But that’s what some people heard.

Now I’m getting lambasted from the other side. I’m getting the “Shame on you” a lot for pursuing natural therapies to treat depression and therefore influencing people to go off of their meds and “kill 20 people.” The tragedies that are so often attached to mental illness in the news are the fault of people like me who encourage folks to mistrust psychiatry.

Let me say this about medication.

I would not be alive today without it.

I credit my psychiatrist for saving my life in March of 2006.

I believe that antidepressants and mood stabilizers can be agents of healing.

There is absolutely a place for medication, and I would never say otherwise.

When I was holed up in my bedroom closet, sobbing in fetal position, with a bag of prescriptions that I intended to use to flatten my pulse, I was incapable of pursuing the steps I am doing now—Bikram yoga, helping others, working with an integrative doctor—to deliver me from that hell. Rarely did I have the stamina to make it to the grocery story, let alone blending green smoothies and learning how to cook nutrition meals. It was through the intervention of a skillful doctor and the right med combination that I stabilized.

Being on meds was absolutely the right thing to do.

However, over the last seven years, I have not responded to the medications as I did earlier in my life. They failed to bring relief from my death thoughts. Plus their side effects compromised my health in ways that were keeping me depressed.

For example, I believe (after reviewing some research) that my experimentation with antipsychotics, or possibly my long-term use of Zoloft, is what caused my pituitary tumor, which completely throws off the hypothalamic-pituitary-adrenal axis that is critical to mood. If the tumor gets big enough, it can affect your vision, even render you blind (the pituitary gland pushes up next to the optical nerve). To manage the growing tumor, I went on a medication called Cabergoline, which, according to some studies, is linked to aortic valve regurgitation, which I now have—and the connection between cardiovascular disease and depression has long been established. At the same time, I developed hypothyroidism and some expanding nodules in my thyroid gland that can happen with use of Lithium. As I’ve written in the past, the thyroid is a delicate and powerful gland that governs so many essential activities in our body related to hormones and mood. Finally, many of my medications have gastrointestinal side effects, which I suspect have something to do with my current inflammatory bowel disease. Our gut is our second brain, so problems there leak into anxiety and depression.

Therefore, I was forced to look into other kinds of therapies to treat my symptoms.

If I’ve been inching closer to the tree-hugger camp in my writing as of late, it is only to make these two points:

Ultimately, though, it’s about doing a cost-benefit analysis.

I would live with blindness and a goiter the size of a football if that’s what I had to do to stay alive. Chronic illness isn’t fun, but it’s better than being dead. And if I felt some relief from the medications, I would tolerate a host of side effects. I believe a person should take the course he or she needs to in order to relieve the most suffering. So, in my case, when the negatives began to outweigh the positives, I knew it was time to take my health in a different direction.

That’s not to say I don’t support the use of medication for people who struggle with depression.

My son’s birth ended up being a traumatic one. I held off on the epidural until the very last moment, but was glad I had taken it, because when his heart rate began to plummet, the doctors performed an emergency C-section. Had I opted to do it naturally, they would have completely knocked me out for the surgery and I would have missed the entire birth.

Modern science saved little David’s life, much like my own.

Fifteen years later, if I were in that birthing class, I’d stand in the same place.

5 thoughts on “There Is a Place for Medication”