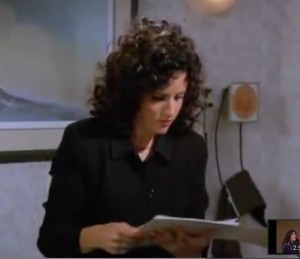 One of my favorite Seinfeld episodes is the one where Elaine snoops inside her medical chart and reads “patient is difficult.”

The doctor takes a look at her rash and says, “Well, this doesn’t look serious,” and writes something in the chart.

“What are you writing?” she asks.

He sneers and walks out the door.

Wanting a fresh start, she goes to see another doctor, and realizes her chart follows her there. The new doctor greets her warmly until he reads the comments.

He glances at her arm and says impatiently, “This doesn’t look serious.”

“But it really itches,” she complains.

He writes something else down in the chart and walks out.

So Kramer, disguised as Dr. van Nostrum, tries to steal the chart, telling the medical office that Elaine is dying.

They don’t buy it and begin a chart on him.

I think my chart must be atrocious by now.

But oddly enough, I don’t care.

I spent the first 42 years of my life trying to be the perfect, low-maintenance patient, placing all my trust in my doctors to get me well. I never questioned their reasoning behind a treatment plan, and automatically filled every prescription they gave me. Even after a very dangerous psychiatrist nearly killed me with all of the antipsychotic concoctions he pushed on me, I still let physicians do the thinking for me because I didn’t want to have a bad report card in my file, feedback like “patient refuses to cooperate.” My people-pleasing baggage as an adult child of an alcoholic followed me to each appointment, urging me to make the doctor feel good about himself.

I didn’t have enough faith in myself that I could steer my own ship toward health.

But that is changing.

With lots of sweat and self-assertion exercises.

For example, I am working with a new doctor because I may have Crohn’s disease, in addition to SIBO, small intestine bacterial overgrowth, and other gut issues. The nurse sent me home with a treatment plan and I followed it for two days before the alarm went off in my head: “Is this really the best treatment plan for me?” my inner physician asked me. “Don’t you want to think about this a little and do some research before you just blindly follow the instructions?”

I bought the supplements I am supposed to take. But after looking more carefully at the ingredients and doing my own research, I decided that I didn’t feel comfortable taking them.

“Am I being difficult? Should I just trust this guy?” I asked my husband. “He probably knows more about gut issues than I do.”

The man who has visited me at two inpatient psychiatric units looked at me for a good ten seconds.

“After all you’ve been through in the last ten years,” he said, “you seriously think he knows more about your health than you do? Just because he has a medical degree, you think he’s smarter than you?”

It was my husband that inspired my take-charge-of-your-health transformation a year and a half ago. He was suffering from hives all over his body and had been to several allergists over a period of a year. They all blew him off, treating him much like Elaine: “Not serious, take Zantac.” When he raised the possibility of food allergies, all three arrogantly dismissed his theory.

So he did his own homework. After reading lots of research on how gluten fuels inflammation, he gave up bread, beer, and anything with wheat.

Two weeks later they were gone.

As he delved into books about how to prevent inflammation, he found a lot of material that pertained to depression.

One cold evening in January 2004 he confronted me.

“You have been severely depressed for five years,” he said. “You are going on six years of continuous death thoughts. You have tried, what, 40 or 50 different medication combinations in the last ten years? Wake up! The psychiatric approach you’re taking is obviously not working.”

At the time I was on four different psych meds and I still very much wanted to die. I knew in my gut that trying medication combination No. 51 or adding yet a fifth medication to my mix was not the answer. But my psychiatrist had saved me from a suicidal depression in 2006 so I had placed her high on a pedestal. I was terrified of deviating from the path she was guiding me down.

After several sleepless nights, I walked into her office and blurted out my truth. “This isn’t working,” I said. “I need to explore a more holistic path.”

I told her that I was going completely revamp my diet by eliminating gluten, dairy, sugar, and caffeine, and I was going to add important supplements like vitamin B 12, vitamin D, omega 3 fatty acids, and turmeric. I was also going to work with an integrative doctor to try to heal my gut with probiotics and other foods, and to address my pituitary and thyroid issues.

We agreed to start weaning off as much medication as possible as long as I remained stable. Because she is the most open-minded psychiatrist I have ever known, she didn’t throw me out of her office or make me feel like a thoughtless fool like Eric’s doctors did, but instead embarked on the journey with me—reading more on gut health, inflammation, and diet.

A year and a half later, she sees my progress and is taking note of it for other patients.

It is easy to regard our doctors as superheroes, omniscient authority figures from whom approval feels necessary. To question something they say or disagree with a strategy toward health can seem disloyal, defiant, or insolent. But no one knows our health better than we do. When we give that power away to anyone, we diminish our possibility for full recovery and rob ourselves of the chance to get as well as we can be.

As for your chart?