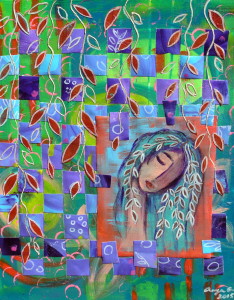 “My favorite escapes from depression are meds and writing,” says Diana Spechler in a New York Times opinion piece. “But I can’t do both at once.”

Friends have been forwarding to me her columns in the “Going Off” series, which chronicles her attempt to wean off the medications she takes for depression, anxiety, and insomnia. Part of me thinks the Times is irresponsible for publishing them, as I know they will encourage many sufferers to try to wean themselves off of their drugs without the care of a doctor. I pray this won’t result in a suicide. And the other part of me applauds them for featuring a writer who is gifted at articulating the complexities of both the disease and the remedies. I appreciate her nuanced perspective, even if I disagree with much of what she says.

Maybe I find the series intriguing because I, myself, am in the midst of weaning off of one medication that I take for my depression: Nortriptyline, an older drug (trycyclic) that is often used for treatment-resistant depression. A year ago, I was taking four medications: Lamictal (Lamotrigine), Nortriptyline, Lithium, and Zoloft (Sertraline). They weren’t helping all that much, as I was still wanted to die. And the thought of being on four psych meds was producing its own anxiety. I couldn’t stop thinking about my poor kidneys and liver. I related to Spechler when she wrote, as part of the first essay: “I’m not free from anxiety … particularly anxiety over my medication. I worry about the long-term effects of these drugs, which are still relatively new to consumers.” Sharing that same concern, I decided to dramatically alter my diet as a way of managing my mood and I was able to wean off one of my drugs, Lamictal, without problems. If I can get off Nortriptyline successfully, I will be down to two!

Or, let me say, I perceive it differently.

I know writer’s block quite well. She doesn’t have to describe to me the shame of missing deadlines because your entire vocabulary is off smoking a duby with the pothead in your brain that has absolutely no career ambitions. Three times in my life, I have endured periods where I was incapable of matching a noun to a verb in a clever way. One was in college. Every sentence on my Humanistics paper about Mary Todd Lincoln started with “Mary Todd Lincoln.” I got a D. In 2005, I had to explain to an editor that I could not produce my column anymore, that the pothead in my brain had fired up some good stuff and invited some friends. I did it again in 2013 with another editor.

However, during these three depressive episodes, it was the depression that stole my words.

“Depression itself often leads to a blunting of emotional reactivity and an inability to feel the ordinary pleasures and sorrows of life,” explains Ron Pies, M.D., professor of psychiatry at SUNY Upstate Medical University and author of Psychiatry on the Edge. “Many people with severe depression tell their doctors that they feel ‘nothing,’ that they feel ‘dead’ inside, etc.”

I once interviewed Dr. Pies on whether or not antidepressants dull a person’s emotions. (That was biggest reason I was terrified to start taking them in my twenties.) He explained:

There is, in fact, some clinical evidence that a number of antidepressants that boost the brain chemical serotonin (sometimes referred to as “SSRIs”) may leave some individuals feeling somewhat “flat” emotionally. They may also complain that their sexual energy or drive is reduced, or that their thinking seems a little “fuzzy” or slowed down. These are probably side effects of too much serotonin–perhaps overshooting what would be optimal in the brain. The sort of emotional “flattening” may occur, in my experience, in perhaps 10-20% of patients who take these medications.

When that happens, Dr. Pies will usually reduce the dose of the SSRI or change to a different type of medication. He went on to emphasize that “most patients who take antidepressant medication under careful medical supervision do not wind up feeling ‘flat’ or unable to experience life’s normal ups and downs. Rather, they find that–in contrast to their periods of severe depression–they are able to enjoy life again, with all its joys and sorrows.”

Our culture misunderstands the relationship between depression and creativity. As Peter J. Kramer, M.D. so eloquently wrote about in his book Against Depression, we embrace heroic melancholy—thinking it is good and right for the artist to suffer. We expect the painter to exhibit wild mood swings in the process of playing with color, and the writer to be tormented by inner demons while giving birth to his work. An artist must pass through times of darkness and torment to arrive at his glorious masterpiece. Kramer penned Against Depression because he was tired of the question, “What if Prozac had been available in van Gogh’s time?”

I am no poster girl for antidepressants. Anyone who has been reading my posts for a year or longer knows that I’m pretty disillusioned with their results. However, when they do work—or when I am able to experience a remission from depression using a variety of tools—my words flow unto the blank page. I can give my inner pothead the bird and craft my blog on schedule.

I loved this conclusion Kramer gives to the van Gogh quandary:

What sort of art would be meaningful or moving in a society free of depression? Boldness and humor – broad or sly – might gain in status. Or not. A society that could guarantee the resilience of mind and brain might favor operatic art and literature. Freedom from depression would make the world safe for high neurotics, virtuosi of empathy, emotional bungee-jumpers. It would make the world safe for van Gogh.

Join the conversation on ProjectBeyondBlue.com, the new depression community.

Art by the talented Anya Getter.